The biological evaluation revealed that 4-quinolones containing a benzylamide function in position 3 and cyclic or acyclic amines in position 7 have a high antitrypanosomally activity. To identify critical structural elements, structure-activity relationships (SAR) are established. The lead structure 29 demonstrates promising activity against T. b. brucei and T. rhodesiense while causing minimal cytotoxicity to J774 macrophages. In trypanosomes treated with compounds 19 and 29, kinetoplast segregation is impaired. (Hiltensperger et al., 2012). 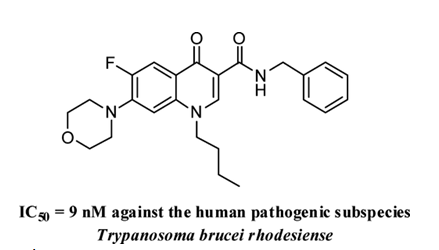 Chagas disease, alternatively called American trypanosomiasis, is a potentially fatal parasitic infection caused by Trypanosoma cruzi.Over 6 million people worldwide are estimated to have Chagas disease. Over 75 million people are at risk, 173,000 new cases are reported each year, and 9,490 people die each year. (dndi.org, 2020a). 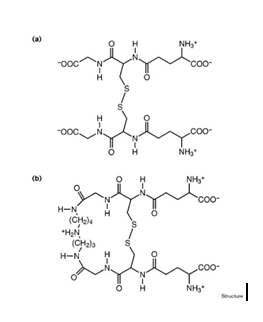 While sleeping sickness is treatable with medication, if left untreated, it is fatal.If bitten by a tsetse fly carrying the Trypanosoma brucei rhodesiense or Trypanosoma brucei gambiense parasite, the person will get East or West African trypanosomiasis. The percentage of tsetse flies infected with these parasites is extremely low. Tsetse flies are only found in rural Africa. Occasionally, a pregnant woman who is infected with T.

brucei gambiense may pass the infection to her unborn child. Other modes of transmission exist, but they are uncommon (sexual, blood transfusion and organ transplantation).Two Trypanosoma brucei subspecies cause disease in humans, with clinical manifestations of infection varying according to the subspecies. T. b. gambiense (Western African sleeping sickness) is prevalent in western and central Africa; T.b. rhodesiense (East African Sleeping Sickness) prevalent in eastern and southeastern Africa.

It is believed that sporadic transmission to hunters and visitors to game parks occurs as a result of a reservoir of wild animals.T. b. gambiense (West African sleeping sickness) is endemic to central Africa and a few areas of West Africa. Tsetse flies prefer rural areas, where they can be found in the woodlands and thickets that dot East Africa’s savannah. Although the tsetse fly transmits the majority of infections, other modes of transmission are possible. 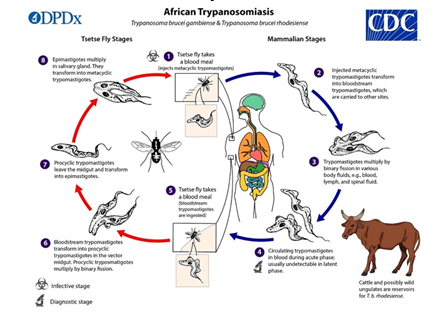 Tsetse flies (genus Glossina) carry metacyclic trypomastigotes and inject them into skin tissue during a blood meal. Parasites enter the lymphatic system and bloodstream. This allows them to spread throughout the body, reach other body fluids (e.g., lymph, spinal fluid), and replicate via binary fission image. The extracellular stages of African trypanosomes are complete.

Tsetse flies pick up bloodstream trypomastigotes from infected mammalian hosts when they feed on their blood. The parasites enter the fly’s midgut as procyclic trypomastigotes, multiply by binary fission, exit the midgut as epimastigotes. Epimastigotes migrate to the fly’s salivary glands and multiply via binary fission image. The fly’s cycle is three weeks long. T. b. gambiense can be passed on to children if the mother is infected during pregnancy.

Patients with African Trypanosomiasis should be treated according to their infection type (T. b. gambiense or T. b. rhodesiense) and disease stage (i.e., presence or absence of central nervous system involvement). Pentamidine, the recommended first-stage T. b. gambiense drug. Surimin, melarprol, eflornithine (and nifurtimox when combined with eflornithine) can be obtained from the CDC.

Otherwise those drugs are unavailable. African trypanosomiasis has no current test or treatment. Patients should be closely monitored for 24 months after treatment to prevent relapse. If symptoms recur, trypanosomes must be tested in body fluids, including CSF.

Acute Chagas disease develops shortly after infection and lasts weeks or months. During the acute phase, parasites might be found in the blood. This stage of infection is usually asymptomatic. Fever or edoema at the infection location (where the parasite entered into the skin or mucous membrane). Sometimes an acute infection causes brain, heart muscle or brain lining inflammation.

Acute infection leads to extended asymptomatic state (called “chronic indeterminate”) with few or no parasites detectable in the blood. During this time, most people are unaware they are sick. Many people live asymptomatic for the rest of their lives. However, between 20% and 30% of infected persons will acquire major, life-threatening medical issues during their lifetime.

Complications of chronic Chagas disease include:

The dilated heart is unable to efficiently pump blood; the dilated oesophagus or colon creates difficulty eating or passing stool.

Chagas disease can reactivate in immunocompromised persons (for example, as a result of AIDS or chemotherapy). Reactivation can cause life-threatening disease.

Acute Chagas disease patients, infants born with congenital infection, and those with compromised immune systems should be treated. Many persons with a chronic infection can benefit from therapy. Patients should discuss treatment choices with their primary physician. Patients may be referred to a cardiologist, gastrointestinal, or infectious disease expert for additional examination.

The kind of infection (T. b. gambiense or T. b. rhodesiense) and sickness stage should be considered when treating African Trypanosomiasis (i.e., presence or absence of central nervous system involvement). Pentamidine, the recommended treatment for T. b. gambiense infection, is available in the US.

Aflornithine is the only drug accessible commercially in the United States. Suramin, melarsoprol, and nifurtimox are available only via the CDC. Physicians can contact CDC officials to obtain these otherwise unavailable drugs. African trypanosomiasis has no modern diagnostic or therapy. After therapy, patients should be monitored for 24 months to ensure no relapse. If symptoms reoccur, trypanosomes must be tested in body fluids, notably CSF.

Are You Looking for Answer of This Assignment or Essay

Need affordable essay writing service online to boost your score in university assessment then consult the experts of Students Assignment Help UK. here we have knowledgeable essay writers who always follow guidelines and prepare the custom essay paper on science subjects at a very less price.